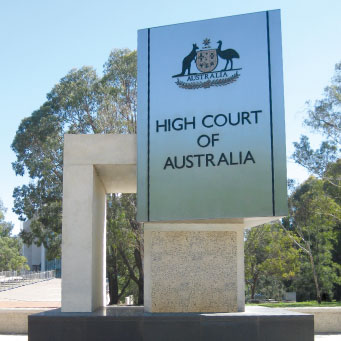 In the recent decision of Robert William Fischer & Ors v Nemeske Pty Ltd & Ors [2016] HCA 11 (6 April 2016), the High Court of Australia considered the extent to which a change in ownership of trust assets is necessary when exercising powers of advancement. Read more here…

The first respondent, Nemeske Pty Ltd, was the trustee (Trustee) of the Nemes Family Trust (Trust), of which the appellants, Robert Fisher and others were beneficiaries. The principal assets of the Trust were shares in Aladdin Ltd (Aladdin) whose value was recorded in an “asset revaluation reserve” in July 1994 as $3,904,300.

In September 1994, the Trustee resolved to distribute the entirety of the asset valuation reserve to Mr and Mrs Nemes, both of whom were also beneficiaries of the Trust. That resolution was made pursuant to clause 4(b) of the Deed of Trust, which provided that the Trustee may:

“advance or raise any part or parts of the whole of the capital or income of the Trust Funds and to pay or to apply the same as the Trustee shall think fit for the maintenance, education, advancement in life or benefit of any of the Specified Beneficiaries …”

No actual distribution of assets took place. Instead, a deed of charge was executed by the Trustee in August 1995 (Deed of Charge), which recorded that the Trustee was indebted to Mr and Mrs Nemes in the sum of $3,904,300, and covenanted that this sum would be paid to them upon their demand.

No demand had been made by Mr and Mrs Nemes at the time of their death in 2011 and 2010 respectively. In his will, Mr Nemes bequeathed both the assets and control of the Trust to the appellants, with the residuary estate to be left to other beneficiaries.

The appellants commenced proceedings in the Supreme Court of NSW against the Trustee (who was also the executor of the Nemes’ estate) (Executors) as well as the other beneficiaries, seeking declarations that the Deed of Charge was void and any purported distribution ineffective. The Executors cross-claimed, seeking payment of that amount allegedly owing to the Nemes’ estate.

The decisions at first instance and in the Court of Appeal

The primary judge held that the resolution was made in valid exercise of the Trustee’s power to advance any capital or income of the Trust and to apply it as the Trustee saw fit.

The Court of Appeal (Beazley P, Barrett JA, Ward JA) dismissed the appeal holding that whilst there was no power to charge the shares, the debt owing to Mr and Mrs Nemes was payable on demand by virtue of the covenant in the Deed of Charge.

The appellants appealed to the High Court of Australia.

The decision of the High Court

In dismissing the appeal, the plurality of the High Court (French CJ, Bell and Gageler JJ; Kiefel and Gordon JJ dissenting), held that whilst there was no change in the beneficial ownership of the shares, the resolution was nevertheless an effective exercise of the Trustee’s power, such that the resolution gave rise to a creditor/debtor relationship between Mr and Mrs Nemes and the Trustee, which rendered it enforceable at law.

In their joint judgment, French CJ and Bell J held that whilst the express authority conferred by clause 4(b) of the Trust Deed to ‘advance’ or ‘raise’ capital or income cannot be said to be found in any Australian statutory provisions derived from s 32 of the Trustee Act 1925 (UK), those words were nevertheless used in such a manner that is “logically anterior to the words ‘pay or apply’” ([32]). They referred to Commissioner of Inland Revenue v Ward [1970] NZLR 1, where it was held that the term ‘pay or apply’ extended to the retention and accumulation of income, and drew an analogy in the present case, where the power to advance or apply under clause 4(b) could not be said to require immediate transfer of the asset to the beneficiaries and “should not be taken as excluding from the ambit of the power of advancement the creation of a creditor/debtor relationship between trustee and beneficiary by the creation of a vested, absolute equitable interest in capital realisable by an action for money had and received or otherwise” ([25]). Their Honours accordingly concluded that there is no principle of law that requires the actual or physical removal of property from a trust to make valid an advance of capital from that trust.

The approach of Gageler J focused on the “two critical steps in the reasoning of the Court of Appeal” ([90]): first, accepting the interpretation of the primary judge that although the resolution did not result in any payment or change in ownership of specific property, it nevertheless gave rise to “an immediate unconditional equitable obligation” ([91]) to pay the Nemes because it was a proper exercise of the power conferred by clause 4(b); and second, holding that the implementation of the resolution by the Trustee by way of a notation in the Trust’s balance sheet recording the liability to Mr and Mrs Nemes in the sum of $3,904,300, was sufficient to have given them a cause of action against the Trustee at common law to recover that sum. Reflecting the reasoning of French CJ and Bell J, Gageler J rejected the appellants’ challenges to each of the Court of Appeals reasoning process.

This decision makes plain that there is no principle of law that requires the actual or physical removal of property from a trust to make valid an advance of capital from that trust and that, subject always to the terms of a particular trust deed, it may be possible to ‘advance’ and ‘apply’ trust capital or income by creating an enforceable future obligation to do so by, in this case, the creation of a debt equal to the value of the shares held by the trustee at the time of exercising the power. The judgment creates obvious challenges for those drafting trust deeds.